The Nigeria media landscape has been awash in recent time with reports of clashes between cattle herders and farming communities, leading to destruction of lives and properties.

The most recent of them is the reported attack on Fulani herders in Nasarawa State on April 30. Before that came the April 25, Ukpabi Nimbo community Enugu State attack where 20 people were reportedly killed by rampaging herdsmen. That of Benue State had assumed a perrennial status.

The media especially social media, blogs and newspapers have been reporting these incidents with wrongly identified photos for illustration. The three most viral photographs used to depict killer herdsmen were indeed not taken anywhere in Nigeria, Daily Trust reports.

Mainstream newspapers including the Punch, Vanguard, Thisday, Guardian etc have each repeatedly used the misleading photographs. Even Daily Trust failed in the past in this litmus test. The social media and online newspapers and blogs are the biggest culprits, Daily Trust checks show.

Blogs such as Naij.com, Venturesafrica.com, Nigerianeye.com, Bellanaija.com and dailypost.ng. com among many others have made these photos as their postal stamp in herders attack reports.
Each of these reports on herdsmen attack, you see accompanying photos of a herder brandishing an AK 47 rifle.

One of these  photos (see below) is the one having a bare-chested man with a rifle strapped to his neck. At the background is a herd of cows.

Daily Trust’s checks showed that this photo has no origin in Nigeria. The photo credit belongs to Reuters/Goran Tomasevic and it was first published online on December 14, 2013. It is a photo of a man from Dinka tribe holding his AK 47 rifle in front of cows in a Dinka cattle herders’ camp near Rumbek, capital of the Lakes State in central South Sudan.

Another photo which has gone so viral that one finds it difficult to locate the very origin is the one with a young man herding cows with a rifle hanging on his shoulders with both hands holding it from the two ends.
The earliest active use of the photo was on January 27, 2015 in the Standard Newspaper of Kenya before Nigerian newspapers cashed in.

Yet another photo that has found massive patronage by the Nigeria press shows a young Pokot warrior by the name Korinamba Ruto, herding his cattle with an AKS 47 gun on his shoulder which the caption says he carries for protection against attacks from cattle rustlers from the neighbouring Turkana community, Kenya.
Turkana tribe is part of the Nilotic tribes and constitutes the second largest pastoralist community in Kenya after the Maasais. 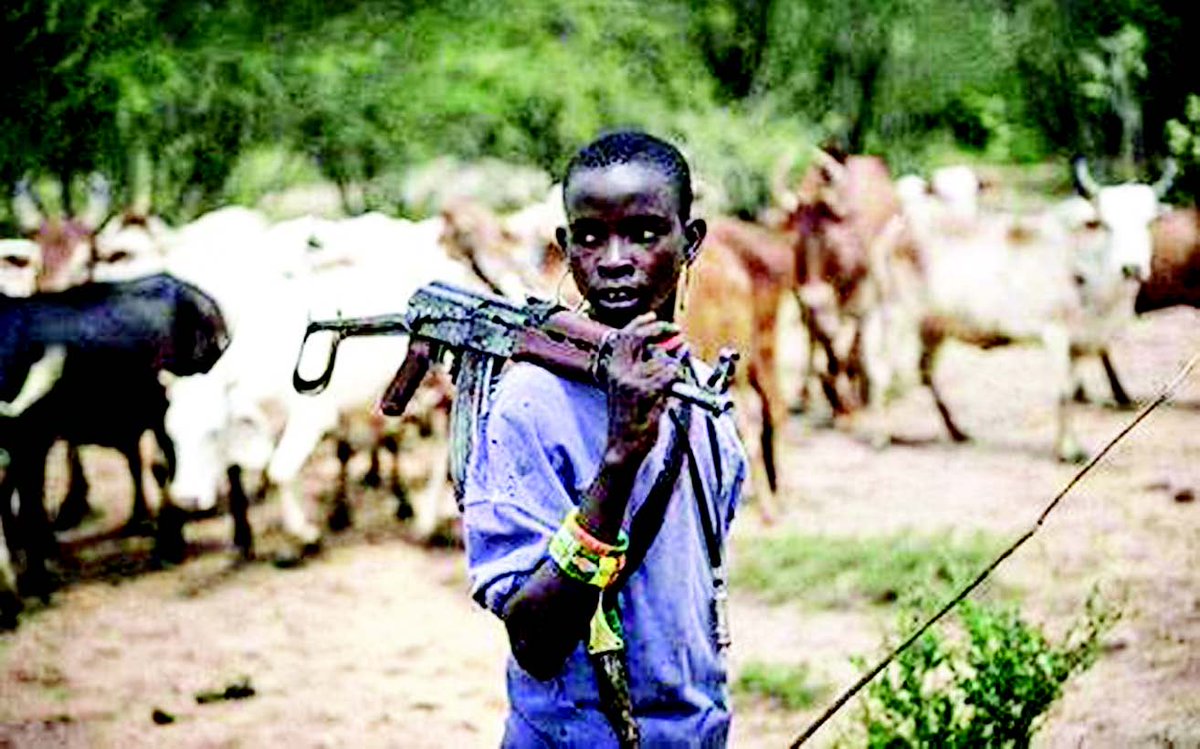 The photo date is June 19, 2012 and the credit and copy right is owned by Sven Torfinn/Panos Pictures /Felix Features.

A simple search using the Google reverse image search or Tineye reverse search will help to resolve the question of where the photo is coming from.

Cattle rusting has been rife in Kenya as some of the ethnic groups there have cattle herding as a main occupation.

Reacting to this development, journalism scholar and columnist from the Journalism and Emerging Media School of Communication, Kennesaw State University, USA, Dr. Farook Kperogi said apart from the legal implications of lifting a photo from the internet without permission from the copy right owner(s), “there is an ethical imperative to verify the real source of a picture before using it, especially in light of the tendency for purveyors of hate on social media to mislabel and misidentify pictures to promote predetermined agenda.”

He counseled media organizations to “always do reverse Google and TinEye images searches before using a picture” adding that “I have seen several pictures of gun-toting Kenyan or Tanzanian Maasai cattle herders misidentified as Nigerian Fulani herders on social media.”

The Nigerian Union of Journalists’ (NUJ) President Waheed Odusile in a telephone interview said it was wrong to “stigmatise a whole group because a few of them are involved in criminal activities.”

He said it is also wrong to use the photograph of foreign herders to illustrate local news with inappropriate identification saying “If it must be used, it should be captioned appropriately indicating that it is not from Nigeria.”
He blamed the practice on some journalists not being “ethically” informed.

The NUJ president challenged the Nigeria media to investigate and expose the criminal elements behind the killing of innocent Nigerians saying “some of the local Fulanis are said to know who the invaders are and their nationalities but are afraid of attack from them (killer herders) should they expose them.”

Also speaking, Dr Kperogi appealed to the national media “to be guided by the age-old professional journalistic ethics of fairness, balance, and accuracy.”
Journalists should particularly watch their language, he says.

He observed that it was “now fashionable to write that someone was killed or kidnapped, or robbed “by suspected herdsmen,’” warning that it was “an unfair criminalization of an entire demographic category.”

Dr Kperogi warned of the dangers in mislabelling  of an entire group of people saying: “It’s OK to write that someone was robbed/ murdered/kidnapped by “criminals suspected to be Fulani herdsmen.”
“Writing or saying “suspected Fulani herdsmen” equates “Fulani herdsmen” with criminals. That’s both unfair and inaccurate. To see how invidious and ridiculous this emergent reportorial phraseology is, replace it with descriptors like “suspected Ogoni farmers,” “suspected Bini traders,” “suspected Yoruba spare part sellers,” etc. and see how it sounds. What is suspected isn’t an ethnic identity; it is the perpetrators of a crime.”

It takes courage, resources, and money to produce this kind of journalism that holds power to account. At Daily Trust, we believe it’s the only way of telling truth to power, ensuring democratisation and restoring Nigeria’s lost glories. To help sustain it, consider supporting us by donating whatever amount you can. Every kobo raised will be solely invested into this type of reporting.

Complain about a story or Report an error and/or correction: +2348189301900 (Whatsapp and SMS only) Email: dtonline@dailytrust.com

DISCLAIMER: Comments on this thread are that of the maker and they do not necessarily reflect the organizations stand or views on issues.